St. Francis CSI Church, in Fort Kochi (aka. Fort Cochin), originally built in 1503, is the oldest European church in India and has great historical significance as a mute witness to the European colonial struggle in the subcontinent. The Portuguese explorer Vasco da Gama died in Kochi in 1524 when he was on his third visit to India. His body was originally buried in this church, but after fourteen years his remains were removed to Lisbon. 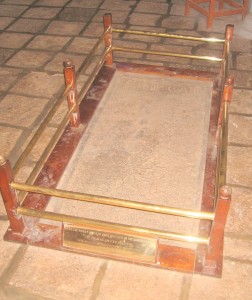 Vasco da Gama, who discovered the sea route from Europe to India, landed at Kappad near Kozhikode (Calicut) in 1498.[4] He was followed by Pedro Álvares Cabral[4]and Afonso de Albuquerque. They built a fort at Kochi with permission from the Raja of Cochin. Within the fort, they built a church with a wooden structure, which was dedicated to St. Bartholomew. The neighbourhood is now known as Fort Kochi.

Francisco de Almeida, the Portuguese viceroy, was allowed, in 1506, by the Raja of Cochin to reconstruct wooden buildings in stone and masonry. The wooden church was rebuilt, presumably by the Franciscan friars, with bricks and mortar and a tiled roof was erected. In 1516, the new church was completed and it was dedicated to St. Anthony.

The Franciscans retained control over the church till the Dutch captured Kochi in 1663. While the Portuguese were Roman Catholics, the Dutch were Protestants. They demolished all the churches except this one. They reconditioned it and converted it into a government church.

In 1795, the British captured Kochi from the Dutch but they allowed the latter to retain the church. In 1804, the Dutch voluntarily handed over the church to the Anglican Communion. It was placed under the Ecclesiastical Department of the Government of India. It is believed that the Anglicans changed the name of the patron saint to St. Francis.

The Church was declared a protected monument in April 1923 under the Protected Monuments Act of 1904. As a protected monument it is under the Archaeological Survey of India but is owned by the North Kerala diocese of Church of South India. It has services on Sundays and commemorative days. On weekdays it is kept open for visitors.

The Portuguese explorer Vasco da Gama died in Kochi in 1524 when he was on his third visit to India. His body was originally buried in this church, but after fourteen years his remains were removed to Lisbon. The gravestone of Vasco da Gama can still be seen here. It is on the ground at the southern side. The gravestones of other Portuguese are on the northern sidewall and the Dutch on the southern wall. A cenotaph in memory of the residents of Kochi who fell in the World War I was erected in 1920.