More than 400 years ago, who had the Lisbon panoramic view of the Tagus would have contemplated, out of Bethlehem, that majestic movement that anticipates the glory, the last galleon of the Great Armada y Felícisima. 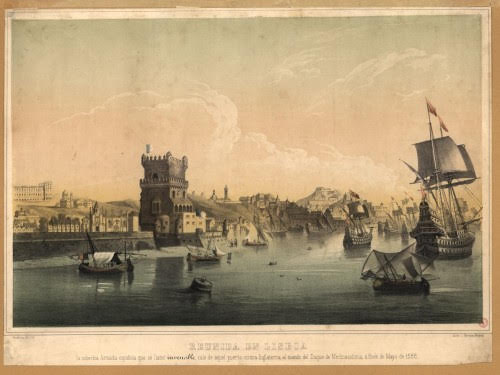 Under the command of the Duke Medina-Sidonia, second choice, 151 boats, manned by 8000 sailors and shipping 18,000 soldiers they had been gathered in Lisbon on the orders of Philip, king of Spain and Portugal.

This year 1588, the British dug daggers in the Dutch side of Spain, putting gasoline, even though they did not know what gasoline was or would become, in the fire that the “United Provinces” of the Netherlands has brought burned. Not to mention the epilepsy seas with that, the corsairs, stilts, skulls and black flags, the British gave in to contaminate the honest trade that linked Spain to the territories which, by the grace of gunpowder, book and cross, had rendered them as colonies.

On 28 May, one by one, the boats started up the river towards the mouth, turning right, as in the ocean, pointed north. For two days the bustle was intense and the people lived it, grateful and excited. 43 boats were Portuguese soldiers and 3000 as well. They went, invincible, dethrone Elizabeth, the first Elizabeth, Queen of England.

Tired of two uninterrupted days commotion, seen from the popular, almost indifferent, the last galleon four by decorated manly masts, forty fire hydrants, double what would have the most warrior boat clumsy English queen. They left for the glory, with the certainty of victory. They lost.
If they had won, there would be Portugal and God knows that interest rates would be today England to ransom the Great Iberia.