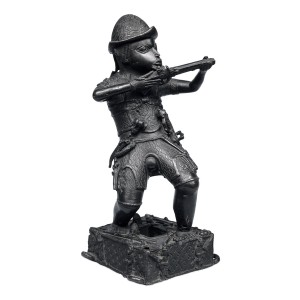 “The Portuguese had fought Muslims on and off during all their national history, but it was not until the conquest of Ceuta that they carried this rivalry into the islamic home territory in North Africa. When they did, it was the Moors turn to feel as if expulsion of the intruders was a holy mission, while indeed, the Portuguese had never lost their sense of Crusade. The result was a century of furious stalemate – from 1415 when Ceuta was captured until D. João III was forced to abandon Safi, Arzila, Alcacer-Ceguer and Azamor, keeping only Mazagão, Tangier and Ceuta itself. This theatre of war was of extremely importance to the training of commanders and the hardening of the soldiers. Afonso de Albuquerque and Duarte Pacheco Pereira were among the most notable of those who learned their trade in these peculiarly vicious fighting, where mistreatment and slaughter of prisioners of war, and even mutilation of corpses was at least as common as the more civilizated practice of holding prisioners for ransom or exchange.

There can be little doubt that much of the barbaraous treatment the Portuguese accorded Muslims in India during the first years of their conquest there had be learned at Tangier and Alcacer-Ceguer, even among those who had come “fresh” from Portugal with no experience, the example set by the veterans was contagious.

It was this very ferocity of the Portuguese soldiers in Asia wich cowed even the boldest of their adversaries: at Diu, a contingent of Muslim soldiers on board an enemy ship threw themselves overboard in their mail, apparently preferring to drown rather than face a far more horrible demise at the hands of the Christian devils. Obviously, the demonic fury of the Portuguese in Asia was misplaced: the Asian Muslims had never been close to North Africa. But the Portuguese had only term – mouros or moors – and ont treatment for them all.

Exactly how high the percentages were of Morroccan veterans fighting alongside Albuquerque and Almeida in the Indian Ocean is impossible to know, but their number was probably high during the first decade or so of the conquest era. It must have been demoralizing for the opponents of Portugal to discover that the men whom they faced actually seemed to fight harder when injured that when unscathed. Battle wounds, in fact, were considered a mark of distinction, as in the case of a man who Diogo do Couto reports to have been injured in a tiff with the king of Jaffnapatam´s forces in Ceylon. This chronicler remarks that “a good deal of blood ran down his fine long beard, wich made him even handsomer and more noble-looking gentleman”.

So eager were the Portuguese to prove their prowess, in fact, that at the first siege of Diu, when a Portuguese grew impatient at having to wait in a queue to have his wounds bandaged, he ran back into the fray and returned only when he had received a more severe injury. Even the dying, it would seem, did not ask special privileges when a fight hung in balance. At the conquest of Goa, one soldier, João de Lima, found is brother, Jeronimo, mortally wounded. As he bent over Jeronimo’s prostate form, the dying man whispered “Brother, you have your way to go and I have mine.” When he returned, he found Jeronimo dead.
If isolated, the incidents would not be significant. However, the chronicles are filled with such stories – men who attempted to scale walls after losing both hands, or men who refused to wear armor in order to mock their enemies and show their disdain for death.

Taken together, these stories provide the most convincing evidence of why small numbers of Portuguese regularly fought much larger enemy forces, as well armed as themselves, and defeated them. Only their brutality, learned in Morroco, and their reckless disregard for personal injury can account for their regular – and baffling – sucesses.”