During the early 300 years of Brazilian colonial history, the economic exploitation of the territory was based first on brazilwood extraction (16th century), sugar production (16th–18th centuries), and finally on gold and diamond mining (18th century).

Colonial Brazil (Portuguese: Brasil Colonial) comprises the period from 1500, with the arrival of the Portuguese, until 1815, when Brazil was elevated to a kingdom alongside Portugal as the United Kingdom of Portugal, Brazil and the Algarves. During the early 300 years of Brazilian colonial history, the economic exploitation of the territory was based first on brazilwood extraction (16th century), sugar production (16th–18th centuries), and finally on gold and diamond mining (18th century). Slaves, especially those brought from Africa, provided most of the working force of the Brazilian economy.

In contrast to the neighboring fragmented Spanish possessions, the Portuguese colony, built up by the Portuguese in Latin America, kept its territorial unity and linguistic integrity after independence, giving rise to the largest country in the region.

Portugal and Spain pioneered the European discovery of sea routes that were the first and only channels of interaction between all of the world’s continents, thus beginning the process of globalization. In addition to the adventurous undertaking of discovery and colonization of far-off lands, these years were filled with pronounced advancements in cartography, shipbuilding and navigational instruments, of which the Portuguese and Spanish explorers took advantage.

In 1494, the two kingdoms of the Iberian Peninsula divided the New World between them (in the Treaty of Tordesillas), and in 1500 navigator Pedro Álvares Cabrallanded in what is now Brazil and laid claim to it in the name of King Manuel I of Portugal. The Portuguese soon began extracting brazilwood from the rainforest for its valuable wood and for the red dye derived from it.

The European discovery of Brazil was preceded by a series of treaties between the kings of Portugal and Castile, which were the leading seafaring powers at the time. The most decisive of these treaties was the Treaty of Tordesillas, signed in 1494, that created the Tordesillas Meridian, dividing the world between those two kingdoms. All land discovered or to be discovered east of that meridian was to be the property of Portugal, and everything to the west of it went to Spain.

The Tordesillas Meridian divided South America into two parts, leaving a large chunk of land to be exploited by the Spaniards. The Treaty of Tordesillas was arguably the most decisive event in all Brazilian history, since it alone determined that a portion of South America would be settled by Portugal instead of Spain. The present extent of Brazil’s coastline is almost exactly that defined by the treaty of Madrid, which was approved in 1750.

On April 22, 1500, during the reign of King Manuel I, a fleet led by navigator Pedro Álvares Cabral landed in Brazil and took possession of the land in the name of the king. Although it is debated whether previous Portuguese explorers had already been in Brazil, this date is widely and politically accepted as the day of the discovery of Brazil by Europeans. Álvares Cabral was leading a large fleet of 13 ships and more than 1000 men following Vasco da Gama’s way to India, around Africa. The place where Álvares Cabral arrived is now known as Porto Seguro (“safe harbor”), in Northeastern Brazil.

After the voyage of Álvares Cabral, the Portuguese concentrated their efforts on the lucrative possessions in Africa and India and showed little interest in Brazil. Between 1500 and 1530, relatively few Portuguese expeditions came to the new land to chart the coast and to obtain brazilwood. In Europe, this wood was used to produce a valuable dye to stain luxury textiles. To extract brazilwood from the tropical rainforest, the Portuguese and other Europeans relied on the work of the natives, who worked in exchange for European goods like mirrors, scissors, knives and axes.

In this early stage of the colonization of Brazil, and also later, the Portuguese frequently relied on the help of European adventurers who lived together with the aborigines and knew their languages and culture. The most famous of these were the Portuguese João Ramalho, who lived among the Guaianaz tribe near today’s São Paulo, and Diogo Álvares Correia, nicknamed Caramuru, who lived among the Tupinambá natives near today’s Salvador da Bahia.

As time passed, the Portuguese realized that some European countries, especially France, were also sending excursions to the land to extract brazilwood. Worried about foreign incursions and hoping to find mineral riches, the Portuguese crown decided to send large missions to take possession of the land and combat the French. In 1530, an expedition led by Martim Afonso de Sousa arrived in Brazil to patrol the entire coast, ban the French, and create the first colonial villages like São Vicente on the coast.

At first, Brazil was set up as fifteen private, hereditary captaincies. Pernambuco succeeded by growing sugar cane. São Vicente prospered by dealing in indigenous slaves. The other thirteen captaincies failed, leading the king to make colonization a royal effort rather than a private one. In 1549, Tomé de Sousa sailed to Brazil to establish a central government. De Sousa brought along Jesuits, who set up missions, saved many natives from slavery, studied native languages, and converted many natives to Roman Catholicism. The Jesuits’ work to pacify a hostile tribe helped the Portuguese expel the French from a colony they had established at present-day Rio de Janeiro. 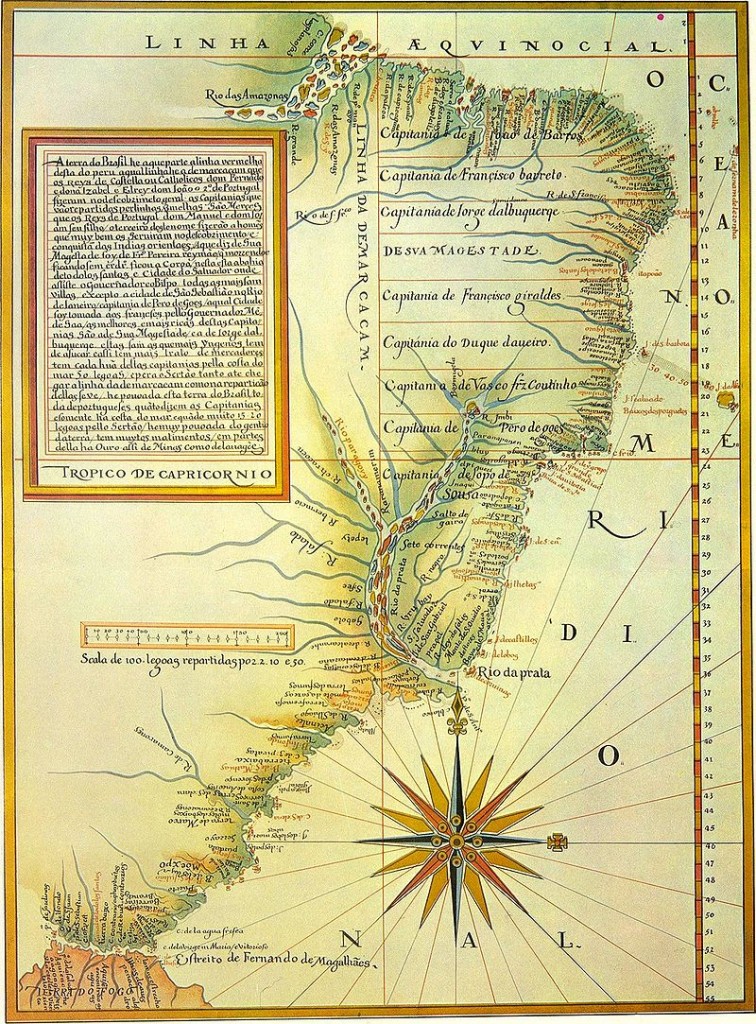 The first attempt to colonise Brazil followed the system of hereditary captaincies (Capitanias Hereditárias), which had previously been used successfully in the colonization of Madeira Island. The costs were transferred to private hands, saving the Portuguese crown from the high costs of colonization. Thus, between 1534 and 1536 King John IIIdivided the land into 15 captaincy colonies, which were given to Portuguese noblemen who wanted and had the means to administer and explore them. The captains were granted ample powers to administer and profit from their possessions.

From the 15 original captaincies, only two, Pernambuco and São Vicente, prospered. The failure of most captaincies was related to the resistance of the indigenous peoples, shipwrecks and internal disputes between the colonizers. Pernambuco, the most successful captaincy, belonged to Duarte Coelho, who founded the city of Olinda in 1536. His captaincy prospered with sugarcane mills used to produce sugar, which were installed after 1542. Sugar was a very valuable good in Europe, and its production became the main Brazilian colonial produce for the next 150 years.

The captaincy of São Vicente, owned by Martim Afonso de Sousa, also produced sugar but its main economic activity was the traffic of indigenous slaves.

With the failure of most captaincies and the menacing presence of French ships along the Brazilian coast, the government of King John III decided to turn the colonisation of Brazil back into a royal enterprise. In 1549, a large fleet led by Tomé de Sousa set sail to Brazil to establish a central government in the colony. Tomé de Sousa, the first Governor-General of Brazil, brought detailed instructions, prepared by the King’s aides, about how to administer and foster the development of the colony. His first act was the foundation of the capital city, Salvador da Bahia, in Northeastern Brazil, in today’s state of Bahia. The city was built on a slope by a bay (Todos-os-Santos Bay) and was divided into an upper administrative area and a lower commercial area with a harbour. Tomé de Sousa also visited the captaincies to repair the villages and reorganise their economies. In 1551, the Diocese of São Salvador da Bahia was established in the colony, with its seat in Salvador.

The second Governor General, Duarte da Costa (1553–1557), faced conflicts with the aborigines and severe disputes with other colonisers and the bishop. Wars against the natives around Salvador consumed much of his government. The fact that the first bishop of Brazil, Pero Fernandes Sardinha, was killed and eaten by the Caeté natives after a shipwreck in 1556 illustrates how strained the situation was between the Portuguese and many indigenous tribes.

The third Governor-General of Brazil was Mem de Sá (1557–1573), an efficient administrator who managed to defeat the aborigines and, with the help of the Jesuits, expel the French Calvinists (formed by Huguenotes alongside with some previous Catholic settlers) who had established a colony in Rio de Janeiro (France Antarctique). His nephew, Estácio de Sá, founded the city of Rio de Janeiro in 1565.

After 1640, the governors of Brazil coming from the high nobility started to use the title of Vice-rei (Viceroy). In 1763 the capital of the Estado do Brazil was transferred from Salvador to Rio de Janeiro. In 1775 all Brazilian Estados (Brasil, Maranhão and Grão-Pará) were unified into the Viceroyalty of Brazil, with Rio de Janeiro as capital, and the title of the king’s representative was officially changed to that of Viceroy of Brazil.