Flor do Mar or Flor de la Mar (Flower of the Sea), spelled Frol de la Mar in all Portuguese chronicles of the 16th century, was a Portuguese nau (carrack) of 400 tons, which over nine years participated in decisive events in the Indian Ocean until her sinking in November 1511. Nobleman Afonso de Albuquerque was returning from the conquest of Malacca, bringing with him a large treasure trove for the Portuguese king, when the ship was lost off the coast of Sumatra. A replica of the Flor do Mar is housed in the Maritime Museum in Malacca, Malaysia. 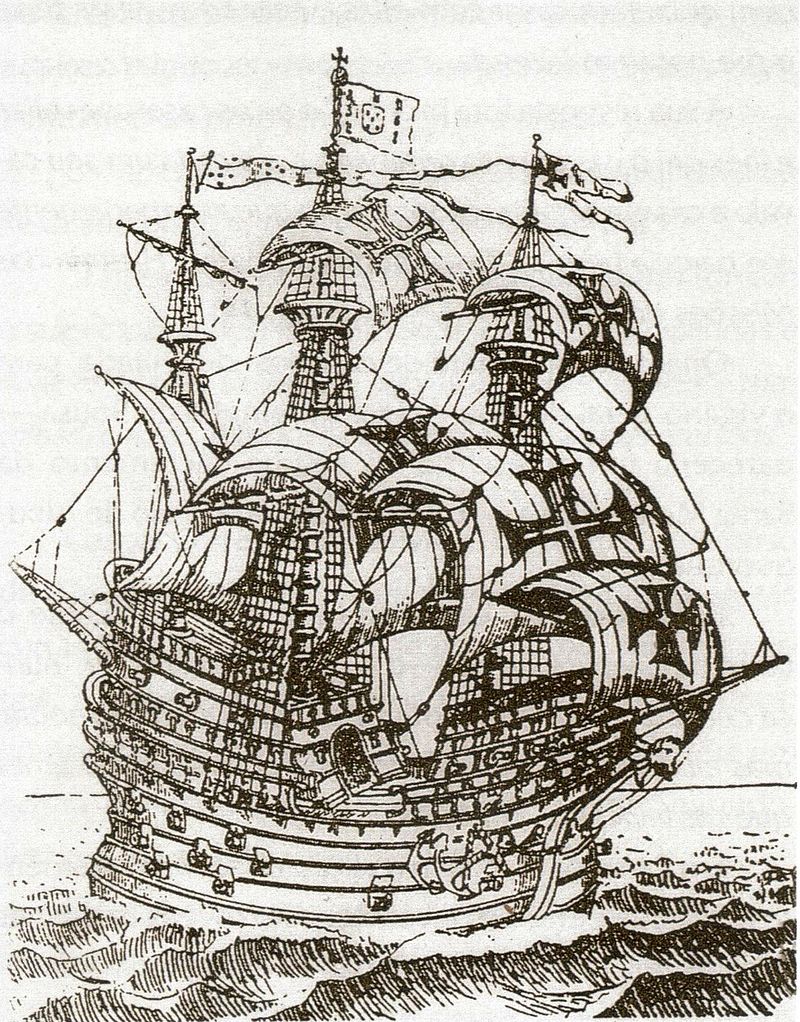 The Flor do Mar was built in Lisbon in 1502, being one of the finest vessels of the time. It was built for the Portuguese India run. At 400 tons, it was the largest carrack yet built, nearly twice the size of the largest ships that had gone on previous runs.

She took her maiden trip from Portugal to India in 1502, under the command of Estevão da Gama, a cousin of Vasco da Gama. However, her return trip in 1503 met some complications – once loaded with spices, her large size and weight made her hard to maneouver, particularly in the fast currents of the Mozambique Channel(notably, around Cape Correntes). Eyewitness Thomé Lopes reports her springing leaks and being forced to stop for repairs on Mozambique Island for nearly two months. She finally arrived in Portugal in late 1503.

The Flor do Mar went out again on another India run in March 1505 under the command of João da Nova, as part of the 7th Portuguese India fleet of 22 ships, carrying D. Francisco de Almeida as the first viceroy of Portuguese India. On the return trip in 1506, she once again ran into difficulties in the Mozambique Channel. Springing leaks, she was forced to dock once again in Mozambique island for lengthy repairs. This time, she would stay stuck in the channel for some ten months. Nova attempted take her out repeatedly, but the heavy-laden ship kept running into problems, forcing him to return to the island, repair and try again.

The ship and her frustrated captain were still stuck in Mozambique when they were found in February 1507 – almost exactly one year after the Flor do Mar left India – by the outgoing 8th India armada under the command of Tristão da Cunha. Cunha ordered his crews to help repair the ship back to seaworthy shape, unload the ship’s spice cargo onto another Portugal-bound transport (under the command of António de Saldanha) and then annexed the empty Flor do Mar and her captain into his own India-bound armada. She was never to return to Portugal.

The Flor do Mar and her captain João da Nova participated in Cunha’s conquest of Socotra. In the aftermath, to Nova’s surprise, Cunha ordered her to remain in the western Arabian Sea, integrated into the patrol squadron of Afonso de Albuquerque. Nova and the ship participated in the Albuquerque-led conquest of the cities of Curiati (Kuryat), Muscat in July 1507, Khor Fakkan, (accepting also the submission of the cities of Kalhat and Sohar) and Ormuz in the same year. Two years later in India, she was commandeered to serve as the flagship of D. Francisco de Almeida in the 1509 battle of Diu. João da Nova died that same year in Cochin, and Almeida (ending his term as vice-roy) planned to bring the Flor do Mar back to Portugal himself, taking special care to repair it into shape. But his successor, Afonso de Albuquerque, forbade it and retained the ship in India, giving Almeida another ship to take home instead.

he Flor do Mar’s longevity was remarkable. At a time when India ships were built for only three or four years of useful service, the Flor do Mar was one of the longest-lasting ships of the India run. However, her service as a cargo ship left a lot to be desired. Dangerously unseaworthy when fully loaded, she only completed one full India run, and not without difficulties. Nonetheless, much was learned from the ship’s experience. Although several larger ships – 600t, 900t, 1500t – would be occasionally built, the average India nau would hover around 400t-450t. As such, the Flor do Mar can be considered the prototype of what would become the typical 16th-century India nau. The ship’s experience also led to the institutionalisation of the “outer route”, i.e. captains of heavy-laden large ships were ordered to avoid returning via the fast Mozambique Channel, but rather sail a longer but calmer course east of Madagascar.

Despite already being deemed unsafe, she served to support the conquest of Malacca, then the largest commercial center of East of Indias. Given her large capacity, Afonso de Albuquerque wanted to give the court of King Manuel I a show of its treasures, and used it in the return voyage, by the end of 1511, to transport the vast treasure amassed in the conquest with the offers from the Kingdom of Siam (Thailand) to the king of Portugal. When the Flor do Mar came out of Malacca towards Goa and sailed along the north-east Sumatran state of Pasé, in the Strait of Malacca, she was caught in a storm and wrecked on some shoals, causing numerous casualties. The ship did not survive the storm and sank during the night of 20 November 1511. Afonso de Albuquerque was saved in the most difficult conditions, using an improvised raft, but the cargo was irremediably lost. Today the Flor do Mar lies in the seabed.

The ship and its location have been the cause of controversy, which states that the dispute with Indonesia Malaysia the salvage of the Strait. Robert Marx, an American treasure hunter, is said to have spent 20 million dollars attempting to recover the riches of the wreck. According to his statement, “it’s the richest vessel ever lost at sea, with its hold loaded with 200 coffers of precious stones, diamonds from the small half-inch size to the size of a man’s fist.” Today a replica of the Flor do Mar is housed in Maritime Museum of Malacca.