The headlines in Mercurio Portuguez announced: “…a galleon called Padre Eterno will come from Brazil. It was built in Rio de Janeiro and is the most famous warship that the seas have ever seen.” The monthly gazette, published in Lisbon, announced this news in the closing of its March 1665 edition. The periodical, published by Antônio de Souza de Macedo, secretary of state of the Kingdom of Portugal, was referring to the 53-meter long ship that could displace 2 thousand tons. Its mast, made from a single tree trunk, had a circumference that measured 2.97 meters at the base. Construction on the ship began in 1559, at the order of Salvador Correia de Sá e Benevides, the governor of the captaincy, or administrative division, of Rio de Janeiro. The shipyard was located on Ilha do Governador , at a site called Ponta do Galeão (now the site of the Tom Jobim International Airport). Sá, a Portuguese military officer and politician, and owner of sugar mills and farms, decided to build the most powerful galleon possible to avoid depending on the protection of government fleets and to be able to engage in the maritime trade. 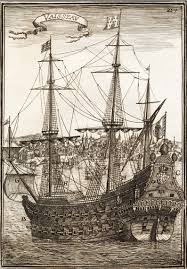 An engraving showing the Padre Eterno at the mouth of Portugal’s Tagus River, in Description de l’Univers (1683), by A.M. Mallet.

Sá imported craftsmen from England to build the ship, even though colonial craftsmen and artisans had already done most of the work with the help of indigenous labor. This is described by Luiz Felipe de Alencastro, a professor of Brazilian History at Paris’ Sorbonne University, in his book O trato dos viventes – Formação do Brasil no Atlântico Sul [The agreement of the living – The formation of Brazil in the Southern Atlantic], published by Companhia das Letras, 2000. The Padre Eterno passed through Lisbon in November 1665, causing a strong impression on the Kingdom and on European embassies, and becoming known as the biggest ship of that time. However, Alencar states that the Kronan, a 2,200-ton Swedish ship, and the Soleil-Royal, a 2,500-ton French ship, were bigger. The Brazilian galleon, however, had been built from light native Brazilian timber and was therefore easy to maneuver, which was an advantage, given the frequent battles at sea during those times. These special features, however, were not enough to prevent the Brazilian galleon from going down in the Indian Ocean, on an unknown date and under unknown circumstances.

The Padre Eterno was a prime example of a major industry that flourished in Colonial times in Brazil up to the end of the eighteenth century. In 1550, Tomé de Souza, the first general governor of Brazil, officially ordered the establishment, in the city of Salvador, of a shipbuilding and repair company. Brazilian ports were visited not only for commercial purposes, but also for the repairing of ships that docked there after many months at sea.

The Portuguese were well versed in the art of building and designing all kinds of vessels, of various types, such as the caravel. The shipbuilding industry was responsible for the epic navigations of those times. Success was made easier thanks to the standardization adopted by the Portuguese for the proportions and measurements of the different types of vessels, built mainly at Lisbon’s Junta das Fábricas da Ribeira shipyard. The Livro das traças (1616), by Manuel Fernandes, describes, in detailed drawings, 20 kinds of vessels. Engineer Pedro Carlos da Silva Telles refers to this book in his book História da construção naval no Brasil (published by Fundação Estudos do Mar, 2001).

Shipbuilding was basically empirical until the mid-eighteenth century. Very little was known about stability, the durability of materials, and resistance to waves and winds. “The only scientific support came from the knowledge that stemmed from experiments conducted by Archimedes in Ancient Times,” explains Telles, a retired professor from the Federal University of Rio de Janeiro. “There were no engineers to design and oversee the construction; as a result, the industry had to bring in master craftsmen from Portugal.”

These came mostly to Bahia and Rio de Janeiro. In the late 16th century, the government of Dom Francisco de Souza granted official status to the Ribeira das Naus shipyard, in the city of Salvador, which had been opened many years before, in the times of Tomé de Souza. In 1650, a royal letter established that at least one 700 to 800-ton galleon had to be launched every year.

The ton corresponded to the ship’s capacity to transport barrels. According to Telles, a 100-ton ship from those times could be loaded with approximately 250 tons, according to current calculations. The quality and abundance of native Brazilian wood was one of the drivers of shipbuilding in those times.

Other states in colonial Brazil also established yards for shipbuilding and repairs. Salvador was at the forefront in this respect, while Rio de Janeiro was a close second. A shipyard to build frigates was opened on Ilha do Governador in 1666. The same shipyard where Padre Eterno was built was also the source of other ships that were the pride of the Portuguese kings, such as the war frigate Madre de Deus and the hugeCapitânia Real.