The Fifth India Armada was assembled in 1503 on the order of King Manuel I of Portugal and placed under the command of Afonso de Albuquerque.

The Fifth India Armada was assembled in 1503 on the order of King Manuel I of Portugal and placed under the command of Afonso de Albuquerque. It was Albuquerque’s first trip to India. It was not a particularly successful armada – navigational mistakes scattered the fleet on the outward journey. Ships spent much time looking for each other and several ended up travelling alone. 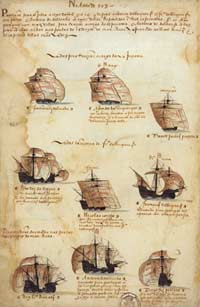 The vanguard arrived in India just in time to rescue Portuguese-allied ruler of Cochin from a land invasion by the Zamorin of Calicut. Anticipating a new invasion, the armada erected Fort Sant’Iago in Cochin, the first Portuguese fort in Asia (under the command of Duarte Pacheco Pereira, its first captain-general). It also established the third Portuguese factory in India at Quilon.

One of the squadrons of the armada, under António de Saldanha, missed the crossing to India, and ended up spending the year preying along the East African coast. Captains of this squadron made several significant discoveries – such as Table Bay (South Africa) and, more importantly, the strategic island of Socotra (near the Gulf of Aden). They also exacted tribute from Zanzibar and Barawa.

The 5th Armada was composed of nine (in some accounts ten) ships split up into three squadrons. The first squadron was led by Afonso de Albuquerque, the second by his cousin Francisco de Albuquerque and the third by António de Saldanha.

Almost all Portuguese chronicles suggest that the first squadron was composed only of three ships. However, the account of Italian passenger Giovanni da Empoli, the only eyewitness account of this armada, claims there were four and gives their names and tonnages as listed above. The list of captains is principally based on João de Barros’s Décadas, Damião de Gois’s Chronica, Castanheda’s História, Faria e Sousa’sAsia and Quintella’s Annaes da Marinha.[6] The Relação das Naus da Índia swaps around Fernão Martins de Almada and Pedro Vaz da Veiga The chronicle of Gaspar Correia places nephew Vicente Albuquerque (son of Francisco?) in command of one of the naus of the first squadron, shunting Almada to the second squadron, in place of Vaz da Veiga (who is omitted).

Afonso de Albuquerque and his cousin Francisco de Albuquerque were knights of the Portuguese Order of Sant’Iago, Nicolau Coelho is the old veteran captain of the India expeditions of the 1st Armada (Gama, 1497) and 2nd Armada (Cabral, 1500). This is his third known trip. It may also be the second trip of Duarte Pacheco Pereira, as he may have travelled as a passenger/man-at-arms on the 2nd Armada.

It is known that at least one of the ships was privately outfitted by the Marchionni consortium. The Florentine Giovanni da Empoli (João de Empoli), who would later write an account of the voyage, was a private factor of the Marchionni house and was aboard their ship (Empoli doesn’t actually reveal which one, although, deducing from his account, it was probably Fernão Martins de Almada’s São Cristóvão). The fourth ship of the first squadron, which Empoli idenfies as the Catharina Dias, was probably also privately outfitted (probably a nickname; Catarina Dias de Aguiar was a wealthy Lisbon merchant woman who had outfitted India ships before, and was probably responsible for this one; the captain of this ship is unknown). It is curious that Empoli is the only writer who mentions the Catharina Dias, none of the later Portuguese chroniclers were aware of its existence.

The 2nd India Armada (1500) under Pedro Álvares Cabral had opened hostilities between the Kingdom of Portugal and the Zamorin of Calicut (Calecute, Kozhikode), the dominant maritime power on the Malabar Coast of India. News of the war had arrived in Lisbon too late to affect the 3rd Armada (1501), but the 4th Armada (under Vasco da Gama in 1502) had been dispatched with more purpose. Gama terrorized the coast, bombarded Calicut and organized a naval blockade of the city, hoping by these means to bring the Zamorin to terms. But the Zamorin refused to yield. Instead, he hired an Arab privateer fleet to break the Portuguese blockade. Although the Calicut-Arab fleet was destroyed by Gama in an encounter before Calicut harbor in late 1502, it was a close-run thing. The Zamorin’s resilience and resourcefulness made it clear to Vasco da Gama that a show of force alone wasn’t enough to reduce Calicut to obedience, that this was going to be a longer fight, which required more men and firepower than the 4th Armada had brought.

Another worrisome development was that two Italian passengers on Vasco da Gama’s fleet had jumped ship in Cannanore and made their way to the court of the Zamorin in Calicut. Both were military engineers and probably secret agents of the Venetian Republic. Thus far, the greater range and firepower of the Portuguese naval artillery had rendered Indian cannon mute and allowed the Portuguese to dominate the coasts with impunity. But the Italians promised to help the Zamorin forge European cannon and close the technological gap. The Portuguese presence in India was on borrowed time.

So after formally renewing treaties with his regional allies, Cochin (Cochim, Kochi) and Cannanore (Canonor, Kannur), Gama’s 4th Armada left India, intent on requesting a stronger fleet from Lisbon, with enough men and arms to, if not reduce Calicut, at least set up a strong Portuguese position in the allied cities. Gama left behind a small armed naval patrol of six or so caravels under his uncle Vicente Sodré, with strict instructions to harass Calicut shipping and, above all, protect the allied cities from Calicut’s revenge.

Gama’s 4th Armada arrived in Lisbon in the late summer of 1503, too late to affect the outfitting of the 5th Armada, which had departed that April. So the 5th Armada of Afonso de Albuquerque was assembled and organized without any news of the results of Gama’s expedition.

It is uncertain exactly what instructions were given to the 5th Armada. The chroniclers report that Albuquerque was given instructions to construct a fort in Cochin, and that one squadron (Saldanha’s) was given instructions to remain in Africa, patrolling the mouth of the Red Sea and harassing Arab shipping. But that conclusion was reached with the benefit of hindsight. It is not obvious that those were the original instructions or intent. Certainly the 5th Armada carried materials for the construction of some sort of timber fortress in India, although that could very well be for Calicut (should Gama’s mission have succeeded). Secondly, Saldanha’s patrol seems more accidental than purposeful – having missed the summer winds for an ocean crossing, there was little else for them to do.

The armada was certainly not a massive or well-armed expedition – only nine ships. If three were indeed designated to remain in Africa, that would leave only six ships (one or two of which were privately outfitted) to handle what was by then an out-and-out war on the Indian coasts. Compared to Gama’s 4th Armada (20 well-armed ships), it doesn’t seem that the 5th Armada expected to encounter much trouble or do much fighting in the Indian Ocean.

One possible conclusion is that the 5th Armada of 1503 was expected to be a rather uneventful commercial India run – that as Gama 4th Armada was supposed to have pacified India, there was little to do other than deliver building materials, load up with spices and return home, at best leaving behind a couple of ships to bolster the Indian Ocean coastal patrol.

April 6, 1503 – The first squadron of the 5th Armada, three (or four) ships under Afonso de Albuquerque, departed Lisbon. (Chronicler Diogo do Couto places it in mid-March[9])

May 1503 – After making a stop at Cape Verde, the first squadron of Afonso de Albuquerque struck out into the south Atlantic, following the South Atlantic Gyre. Along the way, Albuquerque came across Ascension Island. Although the island had already been discovered back in 1501 by the Third Armada of João da Nova (and named ilha da Conceiçãothen), Albuquerque renamed it ilha da Ascensão on account of it being Ascension Day (May 21), the name that has since stuck. Strong south-westerly winds pushed them towards the coast of Brazil, where Albuquerque made a brief stop to take on water (exactly where is uncertain), before making his push across the Atlantic Ocean towards the Cape.

May/June 1503 – In the meantime, the Third Squadron was a pilotage disaster. Caught by a storm off Cape Verde, two of the ships, those of António de Saldanha and Rui Lourenço Ravasco, were caught by the equatorial counter-current and sailed by mistake into the Gulf of Guinea. They ended up at São Tomé island, with no idea where their third ship (that ofDiogo Fernandes Pereira) might have been. (The story of their subsequent misadventures will be told separately below).

June/July 1503 – The second squadron of Francisco de Albuquerque, apparently having had a generally less troubled trip than the others, was the first to round the Cape of Good Hope – albeit losing one ship, that of Pedro Vaz da Veiga, in the process. Francisco Albuquerque’s squadron seems to have been the first of the three squadrons to arrive on the East African coast (Malindi).

August, 1503 – Afonso de Albuquerque’s first squadron rounded the Cape of Good Hope, tossed by terrible storms. According to Empoli (p. 222), the Catharina Dias was sunk, and the remainder were separated. The ship Empoli was on (probably d’Almada’s) was forced to stop in the Angra de São Brás (Mossel Bay) for repairs and resupply. Empoli’s ship would go on to make a stop in Sofala, before heading on to Malindi, the prearranged rendezvous point, to await Albuquerque. However, the monsoon season was sufficiently advanced, that Empoli’s ship would be forced to make the Indian Ocean crossing without the captain-major.

The chaotic, scattered manner in which the squadrons had rounded the cape, had created great delays in the armada. It seems they arrived in Malindi, the launching point for the Indian Ocean crossing, quite late in the summer. They could not wait long for the others, for fear of missing the summer southwesterly monsoon winds to take them across to India – a delay which could add as much as an extra year to their journey (seePortuguese India Armadas). So the Indian Ocean crossing of the 5th Armada was to be done in separate waves.

The second squadron, the ships of Francisco de Albuquerque and Nicolau Coelho, were the first to cross the Indian Ocean in August 1503. They were followed soon after by the solitary ship of Duarte Pacheco Perreira (of the first squadron), followed soon after by d’Almada’s São Cristóvão (on which Empoli probably is) and, a couple of weeks later, by the captain-major Afonso de Albuquerque himself. All three ships of the third squadron (Antonio de Saldanha, Rui Lourenço Ravasco and Diogo Fernandes Pereira) would miss that year’s summer monsoon and would only cross the Indian Ocean the next year (1504).