In 1507, a Portuguese fleet commanded by Tristão da Cunha with Afonso de Albuquerque landed at the then capital of Suq and captured the port after a stiff battle. 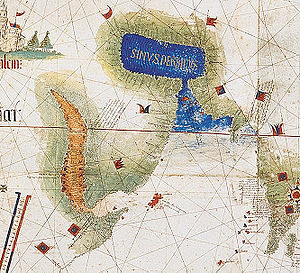 Their objective was to set a base in a strategic place on the route to India, and to liberate the presumed friendly Christians from Islamic rule. Tomás Fernandes started to build a fortress at Suq, the Forte de São Miguel de Socotorá. However, the infertility of the land led to famine and sickness in the garrison. Moreover, the lack of a proper harbour for wintering led to the loss of many moored Portuguese ships, the most important of which was the Santo António gallion under the command of captain Manuel Pais da Veiga. Thus the Portuguese abandoned the island four years later, as it was not advantageous as a base.