The urban design of Cologne, derived from the Portuguese era, is unique in the region for not obeying the strict standard of "checkerboard" of Spanish foundations in the New World. Thus, the layout of the streets is adapted to the topography . and also the no longer existing structures such as the ancient citadel The houses includes fine examples of the seventeenth, eighteenth and nineteenth centuries; the houses of the Portuguese era characterized by massive stone walls and the two roofs or four waters, while the Spanish period are brick and have flat roofs.

A few years after the discovery of Brazil, an expedition led by Martim Afonso de Sousa arrived with his caravels to the Rio de la Plata estuary, with the mission of putting Portuguese possession of landmarks on the left bank of the mouth of the river, having, however, been unable to complete it due to the sinking of his vessel. 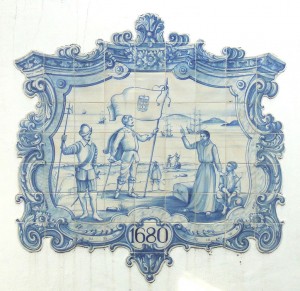 The “Colônia do Santíssimo Sacramento”

The Portuguese Crown expressed their interest again to extend the southern borders of its American colony to the River Plate determined when the governor and Captain-General of the captaincy of Rio de Janeiro, Manuel Wolf (1678-1679), who founded one fortification on the left bank of the river. Thus, with the support of traders in Rio de Janeiro, eager to consolidate its already significant business with Spanish America, the expedition of Manuel Lobo dock at Santos in 1679 purposes and reaches the basin of the Silver in January of the year Next. The January 22, 1680, the Portuguese forces initiated the establishment of the Colony of the Blessed Sacrament, opposite to Buenos Aires, on the opposite bank. The core of this establishment was a simple fortification, started to plant the shape of a quadrangular polygon.

The reply from the Spanish authorities was immediate: in a few months the governor of Buenos Aires, José de Garro, reacted, and the Portuguese nucleus was conquered by Spanish and Indian troops on the night of 7 to 8 August of that year, episode known as Tragic night.

Through diplomatic negotiations, possession of the colony was returned to Portugal by the Provisional Treaty of Lisbon (May 7, 1681), by which the Portuguese Crown undertook to make repairs only on the fortifications made of earth and erguessem shelters for staff. They were prevented from building new fortresses and stone buildings or mud that characterize a permanent occupation.

The January 23, 1683 a new Portuguese squadron took possession of St. Gabriel from Fortaleza, with the Portuguese remained in New Colonia del Sacramento until 1705, when Spain dominated until 1715. In addition to the war end, the establishment of the colony met the commercial sector interests of the Portuguese bourgeoisie, interested in regaining access to contraband in River Plate: interchange with Buenos Aires, covered up legally by asiento privilege. The abolition of the Portuguese monopoly on the supply of African slaves in 1640, cut off the possibility of submission to Spanish America, Brazilian products such as sugar, tobacco, cotton, and European manufacturers in exchange for Peruvian silver. In addition, there was interest in reducing competition platinum to Brazilian leather in Rio de Janeiro, as well as establish a border in March to serve as the goal to reach by land the River Plate. 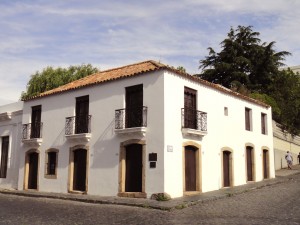 In this context, it was important to find a solution for the Portuguese economic crisis of the second half of the seventeenth century (compared to the decline in the price of sugar on the market, the pressure of commercial interests of the British bourgeoisie to grant access to the British market products and the loss of colonies in the East), for access to Spanish-American mining regions by Buenos Aires – claim barred by the Spanish monopoly.

Thus, the colony became a dynamic center of Anglo-Portuguese smuggling. The foundation of the Colony and the opening of cattle consumer market, leather and salted meat in Minas Gerais, mules and cattle later determine the development of animal husbandry in the Captaincy of Rio Grande de São Pedro.

The Colonia del Sacramento returned to the possession of Portugal from 1817, when King John VI incorporated the entire region of the current Uruguay to the areas of Portugal, the current Brazil. 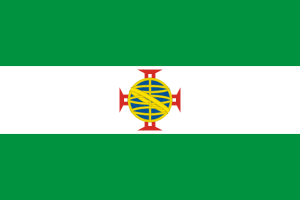 Its last commander was Brigadier Manuel Jorge Rodrigues, who just left the square at the time of establishment of the Preliminary Peace Convention between the Empire of Brazil and the United Provinces of the River Plate (27 August 1828), ratified by Brazil in August 30 and Argentina on 29 September, and reached Montevideo on 4 October 1828. By this law, Uruguay became independent.

Colonia del Sacramento is now one of the most important tourist destinations in Uruguay, receiving thousands of visitors each year. The location of the city is privileged to welcome tourists as it is an hour by boat from Buenos Aires and two hours by car from Montevideo. The tourist offer includes the historic town, museums and La Plata River beaches .

In recognition of the historic value of Cologne, it was established in 1969 an Executive Council Honorary for the conservation and restoration of the ancient city.  The Council held a detailed survey of the area and started work that included archaeological excavations, restoration of facades and interiors the houses and even the change of street names to retrieve the old place names.  In the 1970s have been restored the Church of the Blessed Sacrament Matrix and also the arms gate and part of the wall, partly rebuilt with the original stones.  In its report on the historic town, the evaluator of the UNESCO committee considered that the restoration work was effective and secured the area of ​​authenticity which, along with the historical value of the whole, led to the declaration Colonia del Sacramento historic district as World Heritage Site in 1995.  According to the committee, Colonia del Sacramento is an exceptional example of border village that shows in its urban layout and buildings, a unique blend between the Portuguese and Spanish traditions .

The urban design of Cologne, derived from the Portuguese era, is unique in the region for not obeying the strict standard of “checkerboard” of Spanish foundations in the New World.  Thus, the layout of the streets is adapted to the topography . and also the no longer existing structures such as the ancient citadel The houses includes fine examples of the seventeenth, eighteenth and nineteenth centuries; the houses of the Portuguese era characterized by massive stone walls and the two roofs or four waters, while the Spanish period are brick and have flat roofs.