The São Gabriel was the flagship of Vasco da Gama's armada on his first voyage to India in 1497-1499.

The São Gabriel was the flagship of Vasco da Gama’s armada on his first voyage to India in 1497-1499. 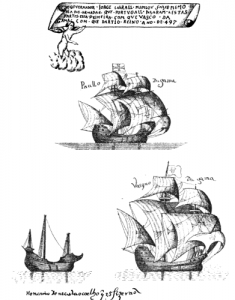 The other three ships

Velho indicated that the sources agreed that the armada contained four ships, but there was disagreement about the names. These were the other three ships according to him:

The provisions of the convoy were based on the expectation that the voyage would last 3 years; also merchandise intended for the Indian market was brought along. This merchandise included wash basins, clothes, sugar, honey, corals, glass beads and trinkets, and turned out to be neither adequate in quality nor in quantity for its purpose. Daily rations were calculated to be 1.5 pounds biscuit, 1 lb beef or 0.5 lb of pork, 2.5 pints water, 1.25 pints wine (customary, also against scurvy), plus 0.3 gill of vinegar, and 0.6 gill of oil. On fasting days meat was substituted by rice, fish, or cheese. Other provisions included flour, lentils, sardines, plums, almonds, garlic, mustard, salt, honey, sugar. Also, fresh fish was caught en route, and supplies were replenished in harbors including oranges(against scurvy).

The ships also carried a number of padrões, pillars of stone headed by the cross and bearing the seal of Portugal and used as markers to claim land.

The armada left Restelo, Lisbon on July 8, 1497. After rounding the Cape of Good Hope, the armada anchored at the Aguada de São Brás (Mossel Bay) where the supply ship was broken up and its contents distributed on the others. The three ships sailed further North along the African coast to Malindi, East Africa. After crossing the Indian Ocean they reached the harbor of Calicut at the Malabar coast in India on May 20, 1498.

The return crossing of the Indian Ocean took over three months and many of the crew members got sick from scurvy and died. With a diminished crew the São Rafael became superfluous; the vessel was burned at East Africa after the transfer of its crew and provisions. The remaining two vessels got caught in a storm near the Cape Verde islands and separated. At that time both ships were leaking and in poor shape.

The Bérrio under Nicolau Coelho’s command arrived at Cascais near Lisbon on July 10, 1499, and the São Gabriel without Gama and directed by João de Sá came in one month later. Gama had left the São Gabriel on its final leg and commissioned another vessel to bring him with his dying brother Paulo to the Azores before he returned to Portugal in early September, 1499.