The Persian orange, grown widely in southern Europe since the 11th century, was bitter. Sweet oranges were brought from India to Europe in the 15th century by Portuguese traders. Some South East Indo-European languages name orange after Portugal, which was formerly its main source of imports. Examples are Bulgarian portokal, Greek portokali , Persian porteghal, and Romanian portocală. Also in South Italian dialects (Neapolitan), orange is named portogallo or purtualle, literally “the Portuguese ones”. Related names can also be found in other languages: Turkish Portakal, Arabic al-burtuqal, Amharic birtukan, and Georgian phortokhali .

The Portuguese imported spices such as cinnamon, now liberally used in its traditional desserts, from Asia. Furthermore, the Portuguese “canja”, a chicken soupmade with rice and a popular food therapy for the sick, shares similarities with the Asian congee, used in the same way, suggesting it may have come from the East.

Tea was made fashionable in Britain in the 1660s after the marriage of King Charles II to the Portuguese princess Catherine of Braganza, who brought her liking for tea, originally from the colony of Macau, to the court. 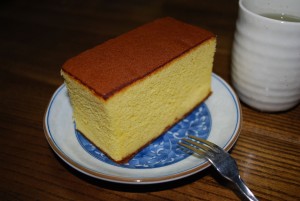 Pão de Castela or Kasutera, a specialty of Nagasaki, Japan

In 1543, Portuguese trade ships reached Japan and introduced refined sugar, valued there as a luxury good. Japanese lords enjoyed Portuguese confectionery so much it was remodelled in the now traditional Japanese kompeito candy, kasutera sponge cake, keiran some, version of Portuguese “fios de ovos” (also popular in Thai cuisine under the named “kanom foy tong”), creating the Nanban-gashi, or “New-Style Wagashi”. During this Nanban trade period, tempura was introduced to Japan by early Portuguese missionaries.

All over the world, Portuguese immigrants influenced the cuisine of their new “homelands” like Hawaii and parts of New England. Portuguese sweet bread or pão doce,malasadas, bean soup (sopa de feijão), and sausages (linguiça, chouriço) are eaten regularly in the Hawaiian islands by families of all ethnicities. Similarly the Portuguese roll – a large bread roll with an open texture – has become a staple of cafes in Jersey, where there is a substantial Portuguese community.

In Australia, variants of “Portuguese-style” chicken, sold principally in fast-food outlets, have become extremely popular in the last two decades. Offerings include conventional chicken dishes as well as a variety of burgers. In some cases, such as “Portuguese chicken sandwiches”, the dishes offered bear only a loose connection to Portuguese cuisine, usually only the use of Piri-piri sauce, and the connection is made simply as a marketing technique.

The Portuguese also had a major influence on African cuisine. They are responsible for introducing corn in the African Continent.