The São João Baptista (English: Saint John the Baptist), commonly known as the Botafogo, was a Portuguese galleon warship built in the 16th century, around 1534, considered the biggest and most powerful warship in the world at the time.

The São João Baptista, Saint John the Baptist, commonly known as the Botafogo, was a Portuguese galleon warship built in the 16th century, around 1534, considered the biggest and most powerful warship in the world at the time. 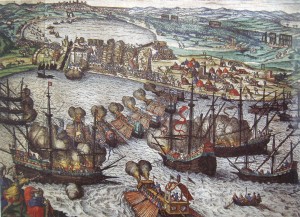 Botafogo on the left in this engraving, Portuguese flag on the top

This ship could carry 366 bronze cannons, and had an artillery power of 1,000 tons. For this reason, it became known as Botafogo, meaning literally fire maker orspitfire in popular Portuguese.

The Botafogo was used both in the Atlantic and in the Mediterranean, where it became famous during the Conquest of Tunis (1535). In that battle, the Botafogowas commanded by Infante Luís, Duke of Beja, brother of John III and brother-in-law of Charles V.

According to historians, it was the Botafogo spur ram that broke up the chains at La Goletta, which defended the port entrance of Tunis, allowing the Christian allied fleet to reach and conquer the city.

One member of the crew named João de Sousa Pereira, a noble from the city of Elvas, became famous because he was responsible for the ship’s artillery, and he also got the nickname of Botafogo, which he later included in his family name. Later, he went to live in the Portuguese colony of Brazil, fighting against the French and the local Tupi Indians. As a reward, the Portuguese Crown granted him some lands known today as the Botafogo area.

The Conquest of Tunis in 1535 was an attack on Tunis, then under the control of the Ottoman Empire, by the Spanish Empire and its allies.

In 1533, Suleiman the Magnificent ordered Hayreddin Barbarossa, whom he had summoned from Algiers, to build a large war fleet in the arsenal ofConstantinople. Altogether 70 galleys were built during the winter of 1533–1534, manned by slave oarsmen, including 2,000 Jewish ones. With this fleet, Barbarossa conducted aggressive raids along the coast of Italy, until he conquered Tunis on 16 August 1534, ousting the local ruler, theretofore subservient to the Spanish, Muley Hasan.Barbarossa thus established a strong naval base in Tunis, which could be used for raids in the region, and on nearby Malta.

Charles V, one of the most powerful men in Europe at the time, assembled a large army of some 30,000 soldiers, 74 galleys (rowed by chained Protestants shipped in from Antwerp), 300 sailing ships, the Santa Anna and Portuguese galleon São João Baptista, also known as Botafogo and the most powerful ship in the world at the time, with 366 bronze cannons to drive the Ottomans from the region. The expense involved for Charles V was considerable, and at 1,000,000 ducats was on par with the cost of Charles’ campaign against Suleiman on the Danube. Unexpectedly, the funding of the conquest of Tunis came from thegalleons sailing in from the New World, in the form of a 2 million gold ducats treasure extracted by Francisco Pizarro in exchange for his releasing of the Inca kingAtahualpa (whom he nevertheless executed on 29 August 1533).

On 1 June 1535, protected by a Genoese fleet, Charles V destroyed Barbarossa’s fleet and, after a costly yet successful siege at La Goletta, captured Tunis. In the ruins, the Spanish found cannon balls with the French Fleur-de-lys mark, evidence of the contacts stemming from the Franco-Ottoman alliance.

The resulting massacre of the city left an estimated 30,000 dead. Barbarossa managed to flee to Algiers with a troop of several thousand Turks. Muley Hasan was restored to his throne. The stench of the corpses was such that Charles V soon left Tunis and moved his camp to Radès.

The siege demonstrated the power projection of the Habsburg dynasties at the time; Charles V had under his control much of southern Italy, Sicily, Spain, theAmericas, Austria, the Netherlands and lands in Germany. Furthermore, he was Holy Roman Emperor and had de jure control over much of Germany as well.

The catastrophic defeat in the Capture of Tunis in 1535 by the Holy League motivated the Ottoman Empire to enter into a formal alliance with France against the Habsburg Empire. Ambassador Jean de La Forêt was sent to Constantinople, and for the first time was able to become permanent ambassador at the Ottoman court and to negotiate treaties.

Charles V celebrated a neo-classical triumph “over the infidel” at Rome on April 5, 1536 in commemoration of his victory at Tunis.

Barbarossa managed to escape to the harbour of Bône, where a fleet was waiting for him. From there, he sailed to accomplish the Sack of Mahon, where he took 6,000 slaves and brought them to Algiers.

The Ottomans responded by recapturing the city in 1574. However the Ottoman governors of Tunis were semi-autonomous Beys who acted as privateers against Christian shipping. Consequently, raiding in the Mediterranean continued until the French subjugated the region as a protectorate three centuries later in 1830 with an invasion leading to the creation of French Algeria, and the establishment of a protectorate over Tunisia in 1881 through the French occupation of Tunisia.