Over centuries Portugal has influenced the lives of the rest of us far more than many much larger and more powerful countries. 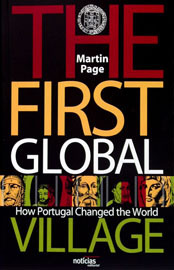 Portugal is Europe’s southwestern extremity, washed by the Atlantic, and warmed by the Mediterranean sun. Alone among Iberia’s ancient kingdoms, in it’s independence from Spain, it is a nation about half the size of Florida, with two -thirds the population. Yet over centuries, it has influenced the lives of the rest of us far more than many much larger and more powerful countries. The Portuguese gave the English afternoon tea, and Bombay, the key to empire. They brought to Africa protection from malaria, and slave-shipments to America; to India, higher education, curry and samosas; to Japan, tempura and firearms.

When Jonah was swallowed by the big fish, he was trying to escape to what is now Portugal. Here, Hannibal discovered the warriors, weapons and gold, to march on Rome; and Julius Caesar found the fortune that paid the way to his conquests of Gaul and England. During the Dark Ages further north, Portugal’s Arab rulers made it part of the world’s most advanced civilization. After the Norman conquest of Lisbon, the new Portugal bankrupted Venice and became the wealthiest nation in Europe. Before he became Pope John XXI, Joao Hispano of Lisbon wrote one of the first modern medical textbooks, consulted through much of Europe more than a century later. Portuguese Jews introduced tulips, chocolate and diamonds to Holland.