In the XVI century Portugal had the most powerful navy in the world and the ninth largest empire on the history until today .

In the XV and XVI century spices were as valuable as gold and only nobles could buy the valuable product from the orient.
In that time two hand full of spices could give a sailor wealth for a lifetime.

With the Arab wars, the spice trade route was closed and only the Arabs were allowed to make the trades, coming through Italy, but for very high prices. 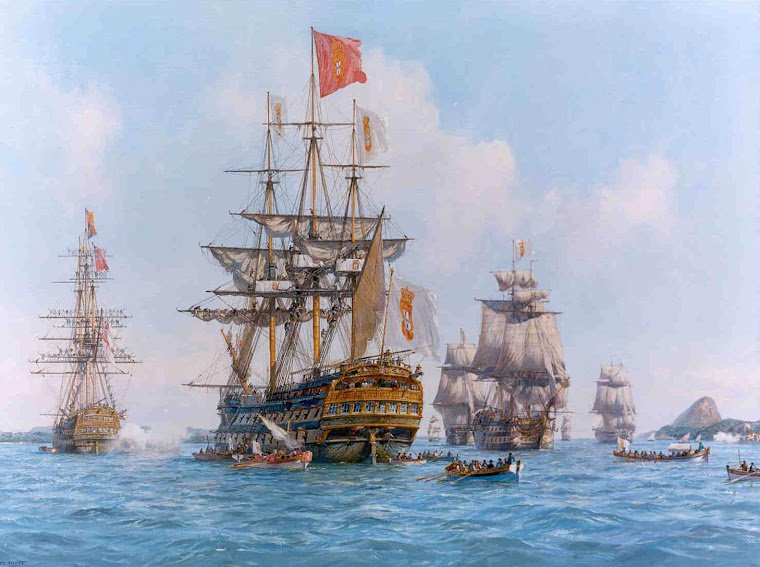 Image description – Brasil when the Portuguese Royal family as arrive in a fleet of more than 50 ships of the line and frigates, 4 British escort ships and 15000 souls.

On the right is the third rate class “Afonso de Albuquerque”
64 guns
55,5mt

Behind is the third rate class “Medusa”
80 canons
52mt

Portugal is at the the edge of Europe and had already discovered the Canary Islands, Azores, Madeira, *Canada and the cost of Africa. That gave Portugal a great advantage over all the other countries in Europe.

With the cut of the spice trade route, Portugal launched a major project to discover the world in the pursuit of Asia by sea.
Soon Portugal become the only European country to bring the spices from Asia to Europe.

With all that knowledge, the King of Portugal developed a “Plan”.
Portugal cut all the passages, conquered cities and built hundreds of fortresses along the entire cost of the Indian ocean.
With the ambitious plan, the king of Portugal monopolized all the trade coming from Asia to Europe.
* Furthermore, the King of Portugal, through Christopher Columbus, was able to deceive the King of Spain. Doing so discover America (Indies), already well known by the Portuguese.

During this period Portugal made impressive achievements, never over matched by any other country.
With all the trade with Asia, America and Africa, Portugal needed larger ships for transportation and for defense.
In the XVI century Portugal had 400 tall ships, “Carracks” ‘Naus’ and ‘Galleons’, and a great number of small ships like Caravels.
England had only 20 tall ships at the time.
Spain with a Mediterranean navy had less then 70 tall ships such as Galleons and “Carracks” Naus.

In the XV century Portugal invented the Caravel, the Latin sail and the “Carrack” Nau, in the XVI Portugal invented the Galleon.
In the year of 1500 Portugal had the biggest fleet of ships the world had ever seen. Ships for voyages to Asia like the Nau “S. Gabriel”, weighing 300 tonnels and “Flor de la Mar” with 400 tonnels, but in just ten years the size of the ships more than doubled in size to 1000 tonnels like the Galleon “Santa Catarina do Monte Sinai”.

The reason being, fast technological improvement was not with out propose.
The voyages of discovery, war and trade took some time, more then a year. To resolve the problem Portuguese ship masters, were designing bigger and bigger ships, until the king made a law to limit the size of the ships.
After decades building so big ships with almost no technology available, Portuguese ship masters reach the perfection and Portugal had the finest and biggest ships ever made by men.
With so much experience and the needs for transport an astonishing amount of goods the ships have an extraordinary quality, never over matched by Spain, England or Netherlands

Those ships stay to history as the biggest galleons in the world, some times as Spanish ships, like the Portuguese galleons, with a Spanish flag and Spanish ornamentation that lead the Spanish Armada named as “The Portuguese Squad”.
Even in Hollywood behind a big Spanish galleon, is frequently a Portuguese galleon with the wrong flag and the wrong colours.
That is an happening in result of the Iberian-union

Some Portuguese accomplishments:
.Portuguese Navy is the oldest Navy in the world and even today, in naval parades, Portuguese battleships are always on the lead, due to its old heritage.
.Portugal was the country that invented the “Globalization” more than 500 years ago. Showing the world to the world
.Portugal was the first European country to start the great age of discovery and exploration in XV Century and create the first global empire.
.Was the first and the last, making the empire during for six centuries, from 1415 to 1999 or until today
. Portugal Invented the Caravel Redonda, the Nau, the latin sail and the Galleon that originate the modern steel battleship.
.Portuguese empire was included in the ten largest Empires in the history with more than 4,5.Millions miles square (10,5 Millions Km square)
.Portugal was the first European Country to discovery *America(Canada) and (Brasil) before Columbus.
.Was the first Country to discovery South Africa, Madagascar, Malaysia, *Australia, Japan and colonize Nagasaki, the most distant colony.
.Was the first European Country to discovery the south Atlantic, the Indian and pacific ocean.
.Portugal create the biggest trade company ever. The first worldwide trade company.
.Portuguese adventurers give the name for an incredible number of places on Earth, including the Pacific and Indian Ocean, territories on Canada, America, Asia, Africa and Oceania.
.A Portuguese adventurer was the first men to make a fleet circumnavigate the planet
.Portuguese language is today spoken in eight countries