The Nau "Madre de Deus" was the biggest ship in the world. Was attacked alone, by 6 English Pirates ships in 1589. Renowned for her fabulous cargo, which stoked the English appetite for trade with the Far East, then a Portuguese monopoly.

1589 Portuguese Nau(Carrack) “Madre de Deus”
Portuguese trade ship. 32 guns, crew 700men , 1600ton , 50m length, 14,5 m width, 7 floors.
Was the biggest ship in the world. This super structure was three times larger than the largest English ship. The proportions of the ship, between Length and high difficult to see the grandiosity of the ship. The “Madre Deus” with 14,5m width(beam) In comparison with the HMS Victory with 15.8m width(beam) is incredible. 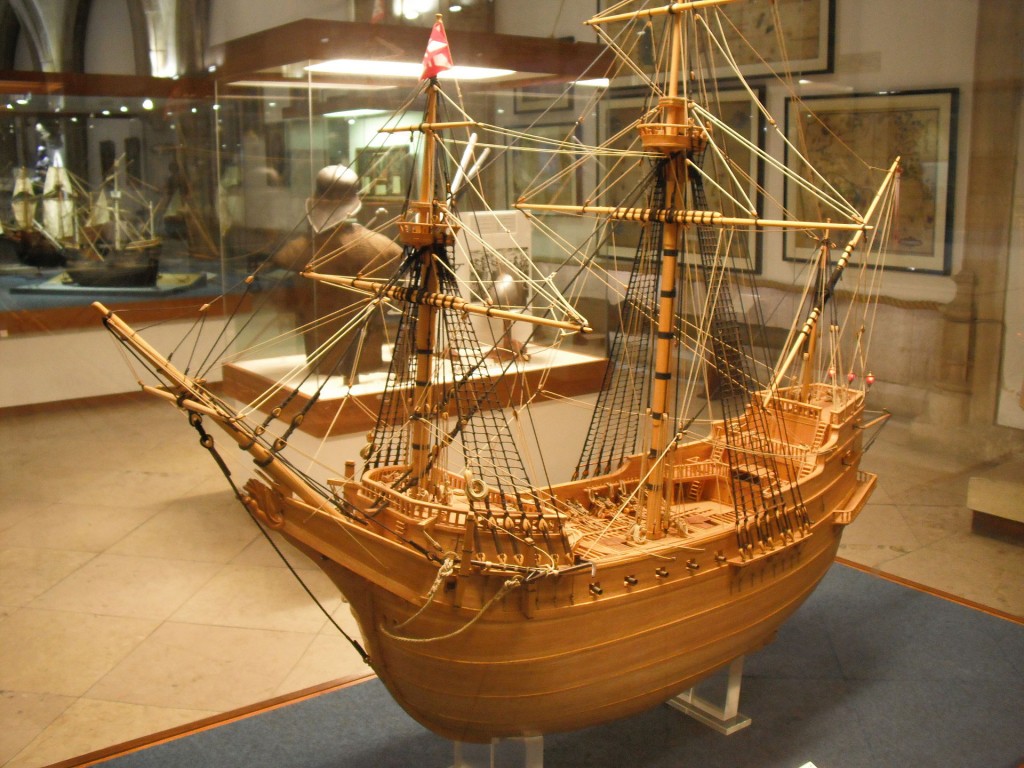 Is a typical Ship from the Portuguese Asian route, the typical black ship used in the trade to japan, much larger then the ships used in Atlantic and the other European countries were used to see.
Was attacked alone, by 6 English Pirates ships and is finaly captured after one entire day of combat. This occurred during the Iberian Union and cancellation of the Treaty of Windsor (Luso-British alliance). The value of the cargo was worth half of the wealth of the English crown and was one of the largest robberies on the history of mankind. This happening cause the turning point when the British start to have interest for India and colonisation.
The builders of British ships sent by the queen to study the ship, they be astonished how is possible build a so big ship and make him float. They reported back that was completely impossible to England built a ship with those dimensions.
This ship stay on port and become an attraction for the people of that region for several month. Every one want see that ship, taller then any building or ship they see in live.

In 1592, by virtue of the Iberian Union, the Anglo-Portuguese Treaty of 1373 was in abeyance, and as the Anglo–Spanish War was still ongoing, Portuguese shipping was a fair target for the Royal Navy.

On 3 August 1592 (sources vary as to the date) a six-member English naval squadron fitted out by the Earl of Cumberland and Walter Raleigh set out to the Azores to intercept Spanish shipping from the New Worldwhen a Portuguese fleet came their way near Corvo Island. The English took her after a fierce day-long battle near Flores Island in which many Portuguese sailors were killed;

Among these riches were chests filled with jewels and pearls, gold and silver coins, ambergris, rolls of the highest-quality cloth, fine tapestries, 425 tons of pepper, 45 tons of cloves, 35 tons of cinnamon, 3 tons ofmace and 3 of nutmeg, 2.5 tons of benjamin (a highly aromatic balsamic resin used for perfumes and medicines), 25 tons of cochineal and 15 tons of ebony.

There was also a document, printed at Macau in 1590, containing valuable information on the China and Japan trade; Hakluyt observes that it was “enclosed in a case of sweet Cedar wood, and lapped up almost an hundredfold in fine Calicut-cloth, as though it had been some incomparable jewel”.

The carrack whilst at Dartmouth, England was subject to theft on an industrial scale; it attracted all manner of traders, dealers, cutpurses and thieves from miles around. By the time Walter Raleigh had restored order, a cargo estimated at half a million pounds (nearly half the size of England’s treasury and perhaps the second-largest treasure ever after the Ransom of Atahualpa) had been reduced to £140,000.