The timber fortress was named Fort Sant'Iago by Afonso de Albuquerque, in honor of the knightly Order of Santiago to which he belonged and it was also the name of his ship.

The 4th Armada of Vasco da Gama had left India in the early months of 1503 with little resolved. Despite terror, bombardment and blockade, Calicut remained defiant, and the two fledgling Portuguese factories in allied cities – one in Cochin, the other in Cannanore – were vulnerable to her revenge. And revenge was not long in coming.

In March, 1503, as soon as Gama’s fleet had gone, the Zamorin of Calicut led a powerful army of some 50,000 armed troops overland against Cochin. Cochin was notionally a vassal of Calicut. More precisely, at least according to some authors, Cochin was a junior family appanage of the mainland kingdom of Edapalli (Repelim); the Trimumphara Raja of Cochin was not a ruler in his own right, but a prince, somewhere down the line (probably second heir) to the ruling throne of Edapalli. It seems the Portuguese had come at a moment when the Trimumpara Raja was in midst of a quarrel with the elder members of his family. Edapalli had, indeed, been a long-time vassal of the Zamorin of Calicut and owed him some sort of obedience. The Zamorin certainly seemed to avail himself of that same family quarrel to secure Edapalli’s cooperation in reducing the rebel prince of Cochin.

The Zamorin seemed to have no trouble marching his massive army across that territory, and it was from Edapalli that Zamorin dispatched a message to the Trimumpara Raja of Cochin, ordering him to hand over the Portuguese traders in the city. When this request was refused, the Zamorin ordered an assault on the city.

The small Cochinese army stood little chance against Calicut’s much larger army (probably bolstered by auxiliaries supplied by Edapalli). Nonetheless, Trimumpara’s son, Narayan, is said to have rallied the Cochinese and valiantly held his position on the Vembanad shores, repelling two massive assaults, before being finally overwhelmed by sheer weight of numbers. Narayan’s brave stand gave his father and his Portuguese guests (the factor Diogo Fernandes Correia and a handful of assistants) enough time to evacuate Cochin city and flee across the outlet to Vypin island with the core of the Nair guard.

Vypin’s position at the mouth of the Vembanad lagoon, with its natural defenses, proved a daunting prospect for the besiegers. But weather also played its part – the worsening Spring monsoon winds and heavy rains severely complicated the operations of the besieging Calicut army. The launching of assault boats against Vypin was almost impossible in these conditions. Frustrated, the Zamorin ordered his army to lift the siege – but not before burning down Cochin city to the ground, and vowing to come back in August, after the weather improved.

Throughout this siege, the Portuguese coastal patrol under Vicente Sodré had been absent. Ignoring the instructions he had been given by Vasco da Gama, Sodré had decided to sail out to the Gulf of Aden in the Spring of 1503, to prey on Arab shipping coming out of the Red Sea, hoping thereby to reap a little bundle of plunder for himself. Alas, seasonal winds had trapped the fleet there. In April, 1503, two of the ships – those of Vicente Sodré and his brother Brás Sodré – fell prey to a tempest and sunk by the Kuria Muria islands (off the coast of Oman). The four remaining storm-battered patrol ships, now under the command of Pêro de Ataíde, decided to return to India. But battered by storms, they had to inch their way painfully against contrary winds. They only managed to get as far as Angediva (Anjadip) island, before being forced to stop for repair (soon joined by a fifth ship, that of António do Campo, which had been separated from the 4th Armada back in 1502).

It was at Angediva (or Cannanore, according to Correia) that the crippled patrol was finally found by the vanguard of the 5th Armada in August 1503 – that is, Francisco de Albuquerque and Nicolau Coelho. Finishing repairs, Albuquerque placed the patrol caravels under his command and set sail south towards Cannanore. Along the way, they were caught up by the ship of Duarte Pacheco Pereira (of the first squadron of the 5th Armada, who had undertaken a solo crossing of the Ocean – the captain-major Afonso de Albuquerque probably decided to remain behind in Malindi as long as possible, to see if Saldanha’s third squadron showed up).

By this time, as promised, the Zamorin of Calicut had reassembled his army and resumed the siege of Cochin (or rather Vypin island, Cochin itself being a smoldering ruins). Receiving the alarming news at Cannanore, Francisco de Albuquerque wasted no time and rushed his fleet of eight ships – the three of the 5th Armada, the four caravels of the old coastal patrol plus Campo – down to relieve Cochin.

Francisco de Albuquerque’s makeshift squadron arrived at Cochin, to find the Trimumpara Raja and the Portuguese factor Diogo Fernandes Correia once again holed up in Vypin island, besieged by the armies of Calicut. Seeing the approaching fleet, the besieging army began to dissolve. Fearing Portuguese retribution, the auxiliary troops (of Edapalli, etc.) were probably the first to abandon the siege, leaving the Calicut army without local support. The Zamorin realized he had little choice but to lift the siege and withdraw his army back to Calicut.

August–September, 1503 – Cochin rescued, a conference was immediately called between the Portuguese commanders and the Trimumpara Raja to assess the situation. It is clear that the Zamorin had relied on the collaboration of the rulers of Edapalli, and other neighboring princelets, for the siege. So a punitive expedition of four caravels set out (under the commands of Nicolau Coelho, Duarte Pacheco Pereira, Pêro de Ataíde and António do Campo) to tour the Vembanad lagoon and pay a ‘visit’ to the collaborators. Notably, Edapalli (Repelim) and Kumbalam (Cambalão) were severely dealt with. 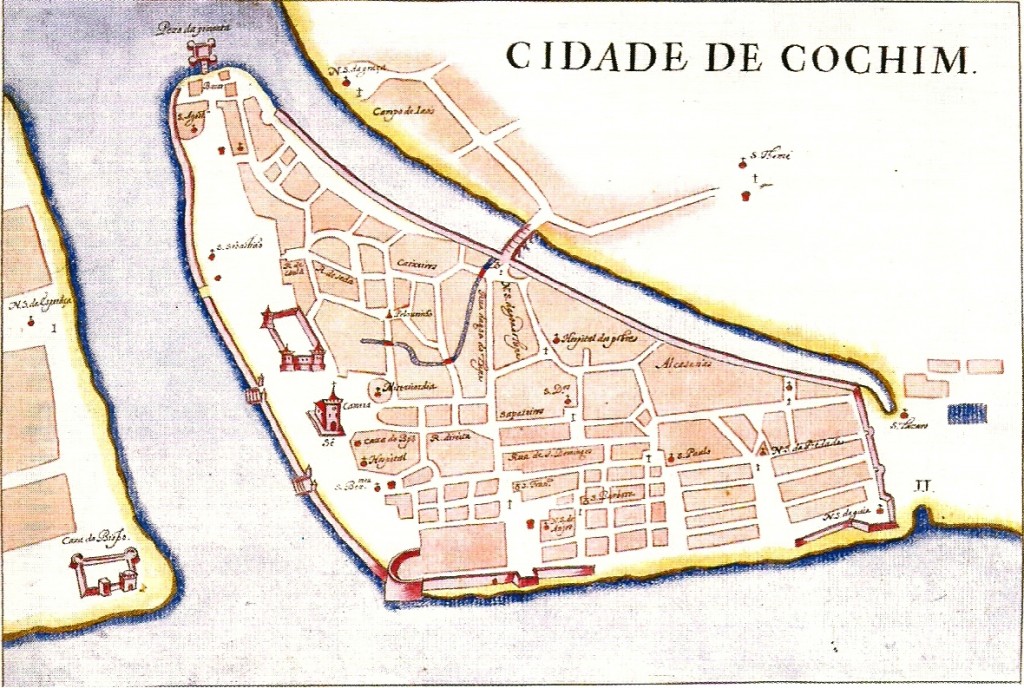 Portuguese map of district of Santa Cruz (Fort Kochi), showing location of Fort Manuel of Cochin. Orientation is eastwards, with Vembanad lake on top, and Arabian Sea at bottom. Vypin island is across the water on the left,Mattancherry across the Rio do Esteiro on the right. At the top of the Santa Cruz peninsula is visible the pezo da pimenta(pepper wharf)

The punitive expedition seems to have put an end to the Vembanad family quarrel and established the Trimumpara Raja as ruler in his own right over the lagoon. More precisely, senior members of his family were probably deposed and it is from this date that Trimumpara formally took the Edapalli throne for himself, thereby becoming recognized overlord throughout the Vembanad lagoon. However, unlike previous Edapalli kings, the Portuguese insisted that Trimumpara Raja remain based in Cochin city rather than move to Edapalli. Thus 1503 is commonly cited as the foundation year of the Kingdom of Cochin.

In the meantime, Francisco de Albuquerque persuaded Trimumpara Raja to allow the Portuguese to erect and garrison a fortress in Cochin. The timber fortress was named Fort Sant’Iago by Afonso de Albuquerque, in honor of the knightly Order of Santiago to which he belonged (it was also the name of his ship). It was erected in a part of Cochinese peninsula, known to the Portuguese as Santa Cruz (or Cochim-de-Baixo, ‘Lower Cochin’, now known as Fort Kochi), just a little northwest of the old city of Cochin proper (Cochim-de-Cima, ‘Upper Cochin’, now Mattancherry) (the seat of Trimumpara Raja). Fort Sant’Iago was the first Portuguese fort in Asia. The timber would be replaced by stone in 1505 by Francisco de Almeida and renamed “Fort Manuel” (after the Portuguese king). The Portuguese were also given permission to erect what is arguably the first Roman Catholic church in Asia, São Bartolomeu, within the fort in 1504 (later rebuilt in stone and rededicated several times, it currently stands as St. Francis church in Kochi).