The Captaincies of Brazil

The Captaincies of Brazil were captaincies of the Portuguese Empire, administrative divisions and hereditary fiefs of Portugal in the colony of Terra de Santa Cruz, later called Brazil

The Captaincies of Brazil were captaincies of the Portuguese Empire, administrative divisions and hereditary fiefs of Portugal in the colony of Terra de Santa Cruz, later called Brazil, on the Atlantic coast of northeastern South America. Each was granted to a single donee, a Portuguese nobleman who was given the title captain General. Except for two, Sao Vicente (later called São Paulo) and Pernambuco, they were administrative and economic failures. They were effectively subsumed by the Governorates General and the States of Brazil and Maranhao starting in 1549, and the last of the privately granted captaincies reverted to the Crownin 1754. Their final boundaries in the latter half of the eighteenth century became the basis of the provinces of Brazil.

Following the successful expedition of Martim Afonso de Sousa in 1530, in order to exploit the trade in Brazilwood discovered on the Atlantic coast, as well as explore rumors of vast riches in silver and gold in the interior, the Portuguese Crown determined to establish permanent colonies in their claim on the new continent. The Portuguese realized that they had no human or financial resources to invest in a large and distant colony, and decided to assign this task to private entrepreneurs, called donatários, each of whom would become owner and administrator of a capitainia or captaincy, a land grant (this system had already been successful in the settlement of the Portuguese colonies in Africa).

The captaincies were drawn as stripes parallel to the equator, commencing at the Atlantic coast and terminating in the west at the Tordesilhas Line (where Spanish territory began). They were established by King John III of Portugal in 1534. Within a system of royal patronage and nepotism, five of the captaincies were given to two cousins of finance minister António de Ataíde: Martim Afonso de Sousa and his brother Pero Lopes. An additional captaincy was issued to Pero de Gois, captain of Afonso’s 1530 expedition. The remaining captaincies were granted to a trusted mixture of military men – more precisely called conquistadores – and court bureaucrats.

Each captaincy was to be of fifty leagues “height” (measured north-south), but in practice, boundaries were marked by pairs of rivers, a plethora of which emptied into the Atlantic ocean on the northeastern coast of the continent. So actual heights varied, as shown in the map at right. Initially fifteen, they were granted to twelve donees. They were the following (north to south):

During the Iberian Union, some of the captaincies attained the status of provinces with royal governors (i.e. “states”), and Portuguese Brazil thereafter was a mixture of donatary captaincies, royal captaincies and states. 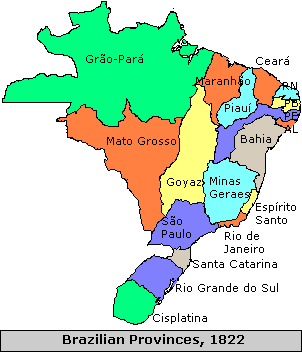 Some complications result from captaincies being merged and recreated with the same name, but representing altered regions. At least a few of the later captaincies were islands or capes of negligible size. Dates are of independent captaincies; in some cases, new captaincies were created as administrative divisions or subcaptaincies of existing ones before becoming fully independent (i.e. Para was established as early as 1616 as a north and westward annex of Maranhao).

The Captaincy of Pernambuco thrived due to sugarcane plantations. The Captaincy of São Vicente, called São Paulo after the city of São Paulo became its capital in 1681, obtained success through the exploration of the hinterland known as bandeiras. In 1621, these became the basis for the southeastern State of Brazil.

In 1815, the State of Brazil was elevated to a kingdom and all existing provinces and Crown captaincies became provinces of the United Kingdom of Portugal, Brazil and the Algarves.

Legacy of the Captaincies

Thirteen modern states have names of their predecessor captaincies, and several cities. The captaincies immortalized a set of Tupi-guarani place names, chiefly those of rivers and mountains.

In echoes of the feudal system of landed noblemen, the huge fazendas of the 18th and 19th centuries were allocated from the land holdings of the captaincies.

Brazil today still lives with the legacy of a plantation culture that consumed four million African slaves and left land ownership hideously askew. An elite 1.7 percent of the landowners continue to own nearly half the arable land; the top 10 percent of the nation earns half the income.