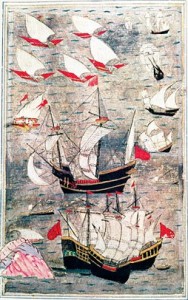 16th century Turkish painting depicting the Ottoman fleet protecting shipping in the Gulf of Aden. The three peaks on the left symbolize Aden.

In the Indian Ocean, Hadım Suleiman Pasha, the governor of Ottoman Egypt, led several naval campaigns against the Portuguese in an attempt to remove them and reestablish trade with India. In 1509, the major Battle of Diu (1509) took place between the Portuguese and a joint fleet of the Sultan of Gujarat, the Mamluk Sultanate of Egypt, the Zamorin of Kozhikode with support of the Ottomans. Since 1517, the Ottomans had attempted to combine forces with Gujarat in order to fight the Portuguese away from the Red Sea and in the area of India. Pro-Ottoman forces under Captain Hoca Sefer had been installed by Selman Reis in Diu.

Diu in Gujerat, was with Surat, one of the main points of supply of spices to Ottoman Egypt at that time. However, Portuguese intervention thwarted that trade by controlling the traffic in the Red Sea. In 1530, the Venetians could not obtain any supply of spices through Egypt.

The Ottomans under the Governor of Yemen Mustafa, fought the Portuguese at Aden (1530–31), and sent a fleet to Diu in Gujerat in order to repel a Portuguese siege of the city under Nuno da Cunha. The Portuguese retreated in February 1531.

Soon after however, the Sultan of Gujerat Bahadur Shah, who was under threat from the Mughal emperor Humayun made an agreement with the Portuguese, who took the opportunity to build a strong fort in front of Diu. The Portuguese seized the stronghold of Gogala (Bender-i Türk) near the city, and built the Diu Fort. Once the threat from Humayun was removed, Bahadur tried to negotiate the withdrawal of the Portuguese, but on 13 February 1537 he died drowning during the negotiations on board of a Portuguese ship in unclear circumstances, both sides blaming the other for the tragedy.

Bahadur Shah had also appealed to the Ottomans to expel the Portuguese, which led to the 1538 expedition.

The Ottoman governor of Egypt since 1525, Hadım Suleiman Pasha, obtained an agreement from Istanbul to launch an attack against the Portuguese. A fleet of 80 ships, including 17 galleys and 2 galleons, was prepared, and the building of a canal was started between the Nile and Suez in 1531-1532. There were delays however due to the Siege of Coron in the Mediterranean, and the Ottoman-Safavid war of 1533-1535. Meanwhile, the Portuguese continued their progression, and killed Bahadur Shah in February 1537 during a diplomatic encounter on a Portuguese ship (The Gujaratis accuse the Portuguese of having pushed him overboard) .

Aden in Yemen was captured by the Ottomans under Suleiman Pasha in 1538, in order to provide an Ottoman base for raids against Portuguese possessions on the western coast of India. The Sultan of Aden, Sheikh Amir bin Dawaud, an ally of the Portuguese, was hanged when he was invited on the Ottoman ships, and the city was captured without a siege.

The Ottoman fleet, consisting of 72 ships, left Aden on 19 August 1538 and arrived at Diu on 4 September 1538. It was the largest Ottoman fleet ever sent into the Indian Ocean. The Ottoman fleet laid siege to Diu with 130 cannons and bombarded the city. Soon however, news were received of the arrival of a strong Portuguese relief fleet. At the same time, it seems that the new ruler of Gujerat was weary of Ottoman control, and did not support them adequately during the siege. The Ottomans finally had to lift the siege.

After the failed siege, the Ottomans returned to Aden, where they fortified the city with 100 pieces of artillery. One of them is still visible today at the Tower of London, following the capture of Aden by British forces in 1839. Suleiman Pasha also established Ottoman suzerainty over Shihr and Zabid, and reorganized the territories of Yemen and Aden as an Ottoman province, or Beylerbeylik. 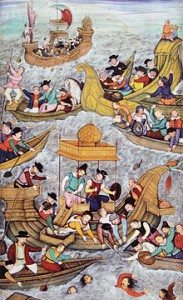 Death of Sultan Bahadur in front of Diu during negotiations with the Portuguese, in 1537. Akbar Nama, end of 16th century.

The Indians would not retake possession of the Diu enclave until Operation Vijay in 1961.