Portuguese In The East: A Cultural History Of A Maritime Trading Empire. by Shihan De Silva Jayasuriya 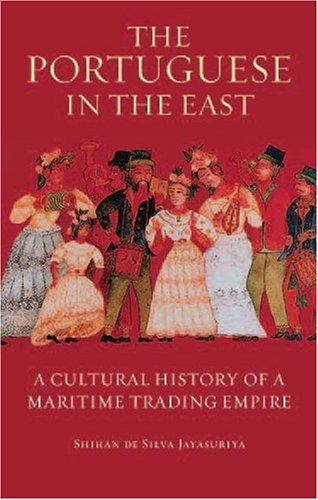 Vasco da Gama’s voyage to India in the late 15th Century opened up new economic and cultural horizons for the Portuguese. At the height of Portugal’s maritime influence, it had created an oceanic state ranging from the Cape of Good Hope to China. While Portugal’s direct political influence in Asia was comparatively short-lived, its linguistic influence remains. Here Shihan de Silva Jayasuriya charts the influences of the Portuguese in more than fifty Asian tongues, illustrating the extent of Lusitanian links.

Luso-Asian influence became engrained in eastern cultures in more subtle ways than other European empires which followed, such as the Portuguese oral traditions in folk literature, now embedded in postcolonial Asian music and song. Through her research Jayasuriya finds that eastern peoples are often unaware of their Lusitanian legacy. She draws on first-hand knowledge and experience, linguistic analyses, existing historical accounts, unpublished manuscripts and her own musical arrangements, to demonstrate how important cultural contact was between the Portuguese and indigenous populations.

The Portuguese language became the lingua franca, the Luso-Asian bridging tongue between not one, but several colonial regimes along the coast of Africa and Asia, from the Cape Verde Islands to Canton and the Moluccas. Jayasuriya shows us the lasting impact of the Portuguese oral traditions in folk literature, which have survived to be translated to postcolonial Asian music and song in India, Sri Lanka, Malaysia and Indonesia.

The other Europeans that followed Portugal and decolonisation and the search for national identities have done little to erase Portuguese cultural imprints in Asia. Portuguese cultural legacies are a lasting reminder of an unexpected outcome of seaborne commerce. Using an interdisciplinary approach, ‘The Portuguese in the East’ shows us that the Lusitanian imprint lies not simply within the official empire but also outside its boundaries, and that the Portuguese who were the “e;first in”e; and “e;last out”e;, have demonstrated remarkable staying power.