The squadron of Vasco da Gama left Portugal in 1497, rounded the Cape and continued along the coast of East Africa.

The squadron of Vasco da Gama left Portugal in 1497, rounded the Cape and continued along the coast of East Africa, where a local pilot was brought on board who guided them across the Indian Ocean, reaching Calicut (the capital of the native kingdom ruled by Zamorins) in south-western India in May 1498. The second voyage to India was dispatched in 1500 under Pedro Álvares Cabral. While following the same south-westerly route as Gama across the Atlantic Ocean, Cabral made landfall on the Brazilian coast. This was probably an accidental discovery, but it has been speculated that the Portuguese secretly knew of Brazil’s existence and that it lay on their side of the Tordesillas line. Cabral recommended to the Portuguese King that the land be settled, and two follow up voyages were sent in 1501 and 1503. The land was found to be abundant inpau-brasil, or brazilwood, from which it later inherited its name, but the failure to find gold or silver meant that for the time being Portuguese efforts were concentrated on India. In 1502, to enforce its trade monopoly over a wide area of the Indian Ocean, the Portuguese Empire created the cartaz licensing system, granting merchant ships protection against pirates and rival states.

Profiting from the rivalry between the ruler of Kochi and the Zamorin of Calicut, the Portuguese were well received and seen as allies, getting a permit to build the fort Immanuel(Fort Kochi) and a trading post that were the first European settlement in India. They established a trading center at Tangasseri, Quilon (Coulão, Kollam) city in (1503) in 1502, which became the centre of trade in pepper, and after founding manufactories at Cochin (Cochim, Kochi) and Cannanore (Canonor, Kannur), built a factory at Quilon in 1503. In 1505 King Manuel I of Portugalappointed Francisco de Almeida first Viceroy of Portuguese India, establishing the Portuguese government in the east. That year the Portuguese also conquered Kannur, where they founded St. Angelo Fort, andLourenço de Almeida arrived in Ceylon (modern Sri Lanka), where he discovered the source of cinnamon.

In 1506 a Portuguese fleet under the command of Tristão da Cunha and Afonso de Albuquerque, conquered Socotra at the entrance of the Red Sea and Muscat in 1507, having failed to conquer Ormuz, following a strategy intended to close the entrances to the Indian Ocean. That same year were built fortresses in the Island of Mozambique and Mombasa on the Kenyan coast. Madagascar was partly explored by Tristão da Cunha and in the same year Mauritius was discovered.

In 1509, the Portuguese won the sea Battle of Diu against the combined forces of the Ottoman Sultan Beyazid II, Sultan of Gujarat, Mamlûk Sultan of Cairo, Zamorin of Kozhikode, Venetian Republic, and Ragusan Republic (Dubrovnik). The Portuguese victory was critical for its strategy of control of the Indian Sea. 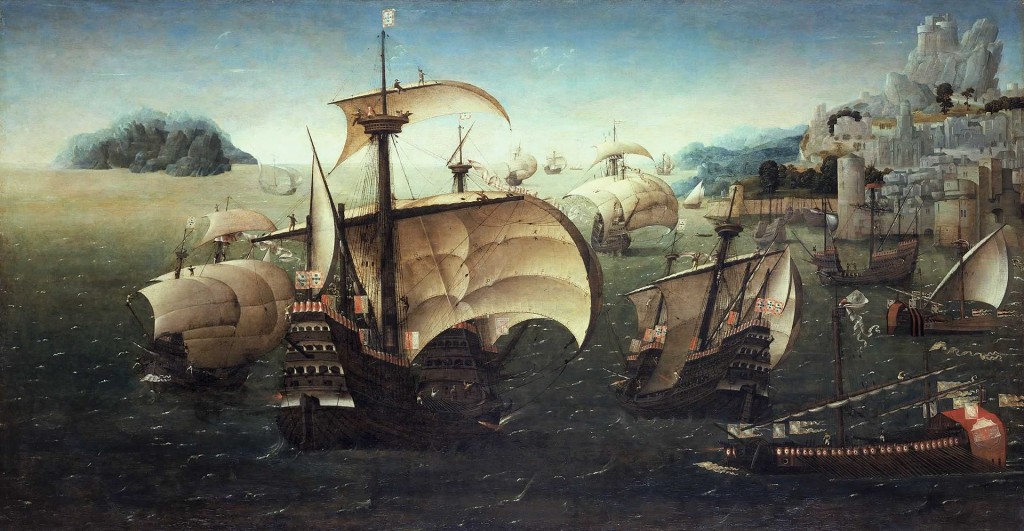 The Santa Catarina do Monte Sinai carrack exemplified the might and the force of the Portuguese Armada.

Under the government of Albuquerque, Goa was taken from the Bijapur sultanate in 1510 with the help of Hindu privateer Timoji. Despite constant attacks, it became the headquarters of the Portuguese state in India, with its conquest triggering compliance of neighbor kingdoms: Gujarat and Calicut sent embassies, offering alliances and grants to fortify. Albuquerque began that year in Goa the first Portuguese mint in India, taking the opportunity to announce the achievement. In 1512, João da Silveira commanded a fleet to Chittagong in the Sultanate of Bengal. The Portuguese settlement in Chittagong was established in 1528.

Initially king Manuel I and his council in Lisbon had tried to distribute power in the Indian Ocean, creating three areas of jurisdiction: Albuquerque was sent to the Red Sea,Diogo Lopes de Sequeira to South-east Asia, seeking an agreement with the Sultan of Malacca, and Jorge de Aguiar followed by Duarte de Lemos were sent to the area between the Cape of Good Hope and Gujarat. However, such posts were centralized by Afonso de Albuquerque and remained so in subsequent ruling.