Soon after the first contacts in 1543, Portuguese ships started to arrive in Japan

Soon after the first contacts in 1543, Portuguese ships started to arrive in Japan. At that time, there were already trade exchanges between Portugal and Goa (since around 1515), consisting of 3 to 4 carracks leaving Lisbon withsilver to purchase cotton and spices in India. Out of these, only one carrack went on to China in order to purchase silk, also in exchange for Portuguese silver. 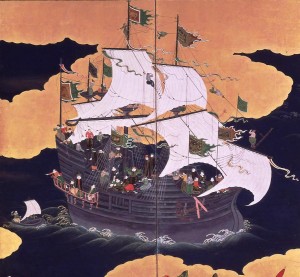 Accordingly, the cargo of the first Portuguese ships (usually about 4 smaller-sized ships every year) arriving in Japan almost entirely consisted ofChinese goods (silk, porcelain). The Japanese were very much looking forward to acquiring such goods, but had been prohibited from any contact with China by the Emperor of China, as a punishment for wakō pirate raids. The Portuguese therefore found the opportunity to act as intermediaries in Asian trade.

With the foundation of the port of Nagasaki, through the combined initiatives of converted daimyo Ōmura Sumitada and his Portuguese friend and confessor, Jesuit missionary Gaspar Vilela, in 1571, the extent of Portuguese trade and influence in Japan, and particularly in Kyūshū, would increase dramatically for the next thirty on years, even furthering the depth of its foothold on the strategic harbour, after having assisted Sumitada in repelling an attack on the port by the Ryūzōji clan in 1578, which in turn led Sumitada to cede Nagasaki “in perpetuity” to the Society of Jesus two years later.

From the time of the acquisition of Macau in 1557, and their formal recognition as trade partners by the Chinese, the Portuguese Crown started to regulate trade to Japan, by selling to the highest bidder the annual “Capitaincy” to Japan, in effect conferring exclusive trading rights for a single carrack bound for Japan every year. The carracks were very large ships, usually between 1000 and 1500 tons, about double or triple the size of a regular galleon or a large junk.

That trade continued with few interruptions until 1638, when it was prohibited on the ground that the ships were smuggling priests into Japan.

Portuguese trade was progressively more and more challenged by Chinese smugglers on junks, Japanese Red Seal Ships from around 1592 (about ten ships every year), Spanish ships from Manila from around 1600 (about one ship a year), the Dutch from 1609 and the English from 1613 (about one ship per year).